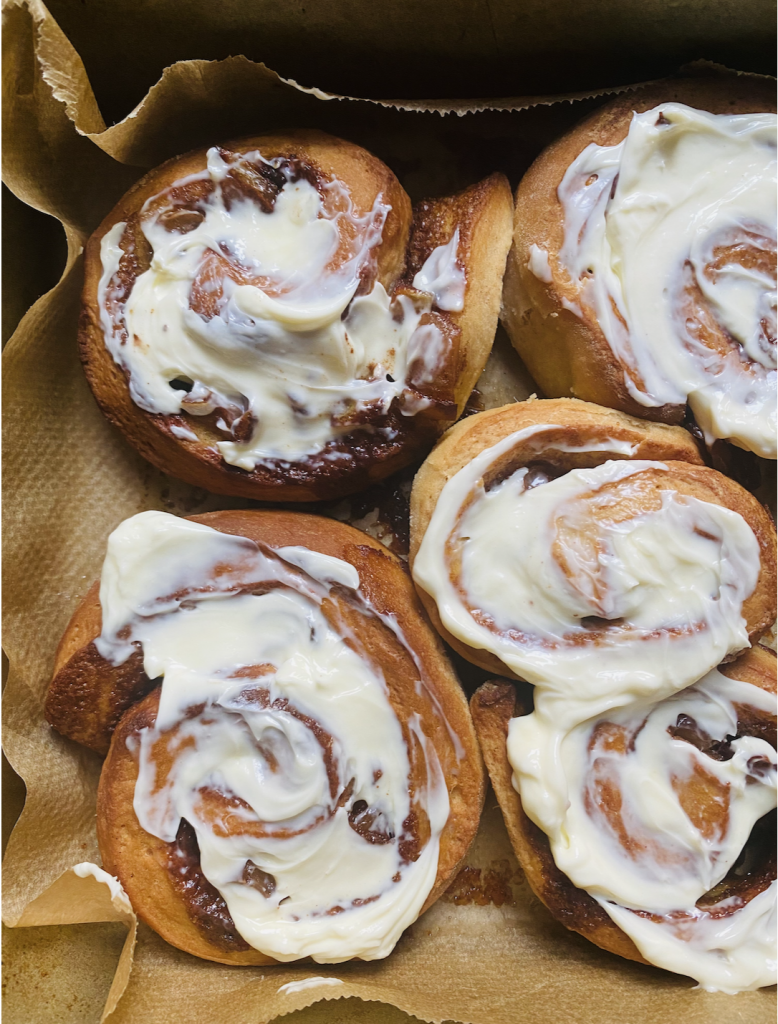 For the cinnamon butter

For the toffee apples

For the cream cheese frosting

The ultimate autumn baked good. It’s sweet, and sticky, and crunchy and soft, and has all the warming cinnamon vibes you need to get you through the changing season. Best consumed in front of a fire place. Two at a time. (vegan alternatives in green)

Start by making the dough: warm the milk in a sauce pan with the butter/spread, heat until steaming & the butter is melting, don’t boil.

In a bowl combine the flour, cinnamon & sugar. Add the yeast & salt to opposite sides of the bowl (salt kills yeast on direct contact) and begin to combine.

Either knead by hand for 10-12 minutes, or use a free standing mixer with a dough hook for 5 minutes. The dough is ready when it’s soft and stretchy. You should be able to pull it apart without it ripping immediately.

Oil a bowl and transfer the dough to the bowl, oil some cling film and wrap over the top. Leave in a warm spot for 2 hours or until doubled in size. If you want to break up the stages of this, you can chill the dough overnight at this stage instead.

To make the cinnamon butter, combine the softened butter, sugar, cinnamon & vanilla in a bowl and stir to combine. Set aside, but don’t refrigerate as you don’t want it hard to spread!

To make the toffee apples, remove the core and dice the apples in to fairly evenly sized pieces. Scatter the sugar in to a even layer across the base of a wide pan. Heat slowly until the sugar starts to melt, without stirring, add the apples. The sugar will go fairly dark but that’s good! When all the sugar is melted, add the butter and about 75ml of water. Swirl the pan to combine. Use a spatula to stir the apples until they start to become soft & sticky. Set aside to cool.

Once the dough is proved, tip out on to a floured surface and roll in to a rectangle shape with a rolling pin. Spread the cinnamon butter over evenly, going all the way to the sides, and scatter with the apples.

At the wide edge, roll up in a long roll, then cut slices of even thickness, there should be about 12 rolls.

Place in to a tin lined with baking paper, with some space in-between. Alternatively, place in to a muffin tin to make individual ones.

Cover with oiled cling film & leave to rise again for around 30 mins – 1 hour or until doubled size. They should be starting to touch at the edge.

Bake for 30-35 mins until golden, risen & darker at the edge. Remove from the oven, set aside to cool for a few minutes whilst you make the icing.

Combine the icing sugar & cream cheese together (don’t stir too much as the cream cheese will start to become liquidy). When the buns are still slightly warm, spread the icing over the top.