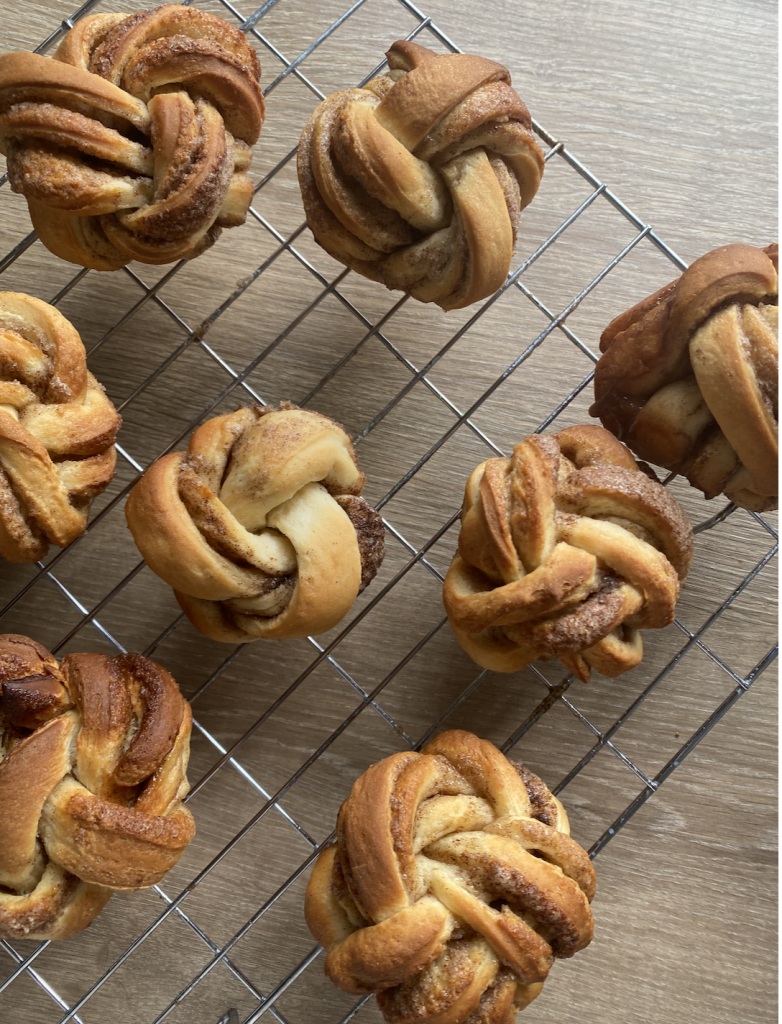 For the cinnamon butter:

These knots are actually so much easier to make than they look, as long as your can do a basic plait, you’ll be great. I do need to mention that these bakes in particular are ode to Coach Harry Kean, nicknamed ‘Buns like Harry’s’ because.. well.. I’m sure you can figure it out.

Start by making the dough. Heat the milk gently in a saucepan until starting to steam, add the butter, start to melt and then turn off the heat and leave the butter to melt in to the milk

In a mixing bowl combine the flour, yeast, sugar & salt. I recommend using a free standing mixer with a dough hook for this if you have it available. Add the milk & butter mix and the egg and knead on a medium speed for about 10 minutes (about 15-18 if kneading by hand).

Put the dough in a lightly oiled bowl, covered by oiled cling film and set aside for an hour or until doubled in size.

To make the cinnamon butter, combine the butter, sugar & cinnamon in a bowl with a spoon or paddle attachment on the mixer until completely combined. Leave at room temp until ready to use.

Remove the dough from the bowl and roll/stretch in to a rectangle about 40 x 50cm in size. Spread the cinnamon butter across the top 2/3 of the dough. Fold the empty third up, then the top third over. Roll a little more with the rolling pin to ensure it’s flattened.

Cut the strip in half, then each piece in to 6 smaller rectangles.

Take a rectangle and cut two vertical lines down, leaving 1cm still attached at the top; then plait the 3 strip together. Roll the strip up to create the knot bun, and place in a muffin tin. Repeat with each rectangle.

Set the tin aside for another 30-45 mins (you can leave to prove in the fridge overnight at this stage instead if you want to make these ahead of time).

Pre heat the oven to 170C. When up to temp, bake in the oven for 20-25 mins until golden brown on top. Remove from the oven, leave to cool just slightly (until cooled enough to handle a little), then remove from the tin on to a wire rack. If you leave them to cool in the tin, they’ll stick!

You can sprinkle with some more cinnamon sugar or top with an icing glaze if you feel like being extra fancy!